Be invited to get some more details and infos about Ulan Bator below.

On 25th of November 1995 first Ulan Bator party took place on a sordid industrial area in Leipzig. As in the case of every beginning improvisation was great, success moderate. It followed soon further venues at left industrial buildings - mainly in the north of Leipzig. After this first period of steady migrations, Ulan Bator rented an addition of hall 14 at Spinnerei an old industrial area for cotton manufacturing, now populated by artists of all genres and starts-ups spreading a mood of enthusiasm for new things at those times. In three years, the crew has developed a small regular on the spot whereby Derrick, Framo, Malcolm and Snoopy spin vinyls and MC Ramo performs on the microphone. - Besides this Ulan Bator organized or participated in bigger events on the Spinnerei area as KOCMOC with up to 1.500 guests. For the b-boys and -girls of Dessaus' electro label Harzfein, the crew directed an outstanding label night with pure turntablism and dancing. 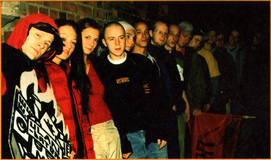 After leaving rooms of Spinnerei due to the dilapidated state of the building, Ulan Bator continued to promote parties at several places. In the dawn of the new century the crew presented together with the Reggae soundsystem: Rotzlöffel HiFi a regular at Kulturbundhaus. Besides this it follows further engagements at different venues all over Leipzig as Conne Island, Redlight D.C., Substanz, and Kosmophon as well as cooperations with the house collective Phono-Tone and Karamel hip hop posse. In the same time, bookings left more and more the city boundaries: Appollo & MC Jamie White, MC Mace, Bassline Generation, DJ Hype (BLN), E.Decay, Pathfinder, Tobstar, and Supersonic Sound have been names among others who turn records, plug in microphones and turn up faders at Ulan Bator parties.

In 2002, Fridayclub at Distillery opens its doors. Soon after five sound crews of Leipzig with background of broken beats and black music came together to fill up the program of Distillery club on Friday. Therefore the crew presented the regular "Ulan Bator Trommel Bass" on every 3rd Friday later on every second month. Thanks to North American Ragga Jungle renaissance, Ulan Bator took the chance to book international djs and producers like Jacky Murda, Krinjah, Nikki Blackmarket, Mad Dem Sound, Mz. Revolution and RCola on the Distillery stage, but also local matadors like Bassface Sascha and Lightwood (Santorin Records). Inspired by the live Drum'n'Bass performance of the local heros of Styleconfusion Soundsystem the crew organized a couple of further showcases for live Drum'n'Bass bands as Miloopa (Wroclaw, PL) and Spielwiese (Mainz). Besides of the Fridayclub regular, there were a few greater but ones of the most impressive parties ever done by Ulan Bator as the 8th anniversary with Dissident Sound (Marseille) in 2003, the 9th anniversary with DJ Natty Ho, TC Izlam, Demolitian Man and Dyer MC as well as a night of live drummer JoJoMayer at Tangofabrik in 2004.

After leaving Fridayclub, Ulan Bator continued to celebrate parties but first less than before. List of played venues is nevertheless abundantly: Absturz, Alte Damenhandschuhfabrik, BAR (Spinnerei), Feinkost, Superkronik and Villa Hasenholz. In 2007 at the Sunflower Festival close to Freiberg the crew organized the Dubstation. In the same year Ulan Bator Records was founded with the first vinyl release of the Canadian Ragge Jungle producer Bombah. At the following year the second one presented with Base a crew member on vinyl for the first time. In same year the second label Junglelivity was etablished continuing the Jungle releases. The first appearance on the label Say Goodnight of Ragga Jungle producer Krinjah and with vocals of Eileen Quashie has been a little smasher at once. With tracks of oldschool junglelist Bay B Kane many further records rolled out of the press, but also a bunch of talented new artists as Bone Man, D.I.S, FeyDer, Rolling Paper and XBass scratched their sound on Junglelivity vinyls. The dub release Aphreka EP of the origin Greek producers Fleck and Blus Hill in 2016 is a highlight of Ulan Bator Records. It comes from hearth and mirrored the musical openess of the crew since the first days. It's like a manifest on the base of Jungle, but ears are focused on influences from north to south, from east to west.

In 2011 for the first time after one attempt years ago, Ulan Bator has designed a truck for Global Space Odyssey a parade through Leipzig stating socio-critical issues along the club culture. Since then the crew has participated nearly every year on it. At the new club Elipamanoke, Ulan Bator etablished again a regular without a fixed date and linked partly on Fridayclub time with international bookings of Fleck und Marcus Visionary, or Lala & The Booya performing an amazing Jungle liveset.

In the mid of decade the focus of Ulan Bator has changed again. The crew joins a phase with more collaborations and takes a step back as single promoter. Together with friends and other collectives the crew creates a bunch of new projects. First of these and running till today is 3Takter. At the beginning located at Elipamanoke later moved to Gieszerstraße it is a Bass, Dub and Jungle residential of Plug Dub, Ulan Bator and Vibes Ambassadors.

Story will be continued ...